For Whom the Berceuse Tolls:
Josef Hofmann going beyond the text

“How are performers to generate new meaning from apparently well-known scores?”, Daniel L-W asked in Chapter 20. For some it takes an imaginative perspective on what the notes in the score can allow, rather than feeling burdened by what they should require. There are musicians, inspired by programmatic images or narratives, who project unexpected sonorities or internal relationships, often evoking poignant spatial images and associations for listeners. These performers, thus, go far beyond notation or draw attention and give meaning to details that most might otherwise pass by.

I wish to present one such performance, that by Josef Hofmann. This performance of a well-worn work demonstrates, first and foremost, the incomplete nature of any composition and the ability of performers to create unexpected meaning from notational scripts. So doing, Hofmann not only presents a rendition of impressive virtuosity, subtitlety of touch, and sensitivity of dynamic balance, but also challenges interpretive norms (both of its time and today) by reorienting conventional hierarchies that exist between melody and harmony, tone and noise. Above all else, this performance opens up the musical possibilities for future musicians who choose to revisit compositional works with the desire to co-create them anew or position them in imagined spaces.

In his Golden Jubiliee Concert in 1937, the pianist Josef Hofmann performed Chopin’s Berceuse Op. 57, a pianistic warhorse if there ever was one. One of the most distinctive features of the composition is the figure in the left hand that is repeated throughout the work and that one can hear from the first measures.

Except for the final two cadential measures, these bars maintain exactly the same rhythmic configuration throughout, each phrase initiated by a low D-flat, a pedal note that grounds us in D-flat major. From this low bass note rises a kind of asymmetric arching figure of 8th notes that moves up slowly before falling back down to a resting quarter-note, like a boat gently rocking in the waves. This quarter note falls on the 5th beat, pausing for a hesitant moment, before the swaying figure repeats itself.

The harmonic framework of this figure remains largely unchanged throughout, as it moves back and forth between the tonic and dominant. The most significant change to this passage comes in m. 59 when the A-flat that so regularly falls on the second and fifth beats of the bar, rises up to a B-flat at the same time that the harmony shifts to the subdominant, G-flat major. This slight adjustment holds steady for two measures before the B-flat falls back down to A-flat and the harmony moves through the dominant back to the tonic, D-flat major. (See Example 1 below)

For all this description, this gesture in the left hand might appear to be one of the most insignificant qualities of the composition. More striking and foregrounded throughout the short work are the delightful, decorative, passages of arabesque. Here we find the most magical, colorful, and inventive pianistic play, melodies woven around virtuosic gestures, twisted between trills and, at times, swallowed up within changing rhythms and textures. For most pianists, the right hand is the star, the rocking left hand nothing more than a harmonic foundation and a rhythmic pillar above which the right hand can shine.

In Hofmann’s performance, the pianist’s right hand absolutely astounds. Rarely do we hear the ease with which triads in mm. 35-36 ascend so lightly and daintily into a series of increasingly complicated 32nd-note passages. But the pianist’s virtuosic sprezzatura conceals any hint of difficulty and, instead, weaves a gossamer that increasingly glimmers but never explodes. As the energy recedes and the right hand slows, with a few hesitations and circuitous triplets, Hofmann calms the listeners, preparing them for the cadential slumber to come. As Chopin introduces a C-flat in the right hand in m. 55 (Example 1), generating a secondary dominant that prepares the G-flat major harmony, Hofmann singles out the C-flat. Its repetitions resonate above the meandering 16th notes from which the note emerges. Four measures later, as the harmony slides down to G-flat, so, too, does the C-flat descend melodically to the B-flat, which continues to ring out. Two measures later, the harmony descends further to the dominant and one might expect the descending line to conclude, from C-flat to B-flat to A-flat. 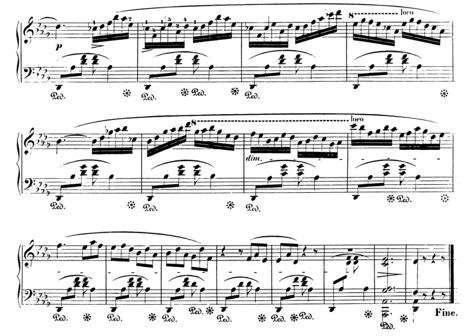 And it does…but, by Hofmann, in the most unexpected of ways. Instead of foregrounding the melodic permutations in the right hand, Hofmann lets ring the A-flat on the second beat of the left hand, a note almost lost into obscurity by the dozens of repetitions. Three beats later Hofmann does it again, and again, and again. Nothing in Chopin’s score indicates a modicum of significance to this note. And yet for Hofmann, the sonorous A-flats give shape to the soporiferous conclusion. As the dynamics of the melody and harmonic foundation fade away, the A-flat on beats two and five toll above everything else. The chiming of the A-flat positions us in such a way that we hear the melody and accompaniment pass into the distance until it becomes nothing but a passing memory. All we’re left with is the resonance of the tolling bell that, upon concluding, dissolves into the slumberous final chords.

What’s remarkable is how Hofmann transforms this mere accompaniment, nay, two single notes within the accompaniment, into an entirely new, nostalgic landscape that continues to exist within Chopin’s musical script but also escapes it at the same time. Within the world of functional tonal harmony, the A-flat could serve as either the root of the dominant (as a tension building pedal) or the 5th of the tonic (a weak reinforcement of D-flat). But in the hands of Hofmann, it serves neither of these purposes. Hofmann’s A-flat fits into the surrounding notes on one hand, but never quite joins them in directing the melody or guiding the harmony. They neither lead nor resolve. They simply chime, like a clock announcing the new hour (16 o’clock?). Rhythmically, the tolling bell sounds on the off-beats within the 6/8 meter. Yet as everything else, both in the left and right hands, becomes more dynamically distant, the melody fragments, and the tempo slows down, the syncopated tension of the bell dissipates and, by the end, beats to its own time.