Another key belief fostered in order to make the exceptionally arduous training seem worthwhile is that each performer is developing a unique and personal approach to using their instrument and interpreting their repertoire. In a literal sense it must be true that no one is quite the same as anyone else. But how different are they? Different enough for the claim to mean something? Different enough to shed significantly fresh light on these scores? And how different can you be when your job is to realise the composer’s intentions encoded already in the Work? WCM is hugely conflicted over this question, and nowhere is that more obvious than in competitions. As Lisa McCormick (2015) has shown in her broadly sympathetic study of competitions, and Izabela Wagner (2015) in her more damning testimony,[1] on the one hand for jurors ‘there was no greater delight than to hear competitors find something new in a piece’; on the other ‘Unorthodox interpretations that stray too far from what the composer wrote and from stylistic convention not only are inaccurate; they also cause offence. To complicate matters further, stylistic convention is not strictly defined and is often bitterly debated.’ (McCormick, 173–4) The space for individuality is small when, as we shall see with the greatest clarity when we look at the work of record critics, difference is so readily and strongly condemned.

Listening to the work of conductors and superstar soloists it’s not hard for musicians to hear differences. Comparing Fischer-Dieskau and Bostridge in Schubert, Hahn and Mutter in Brahms, Rattle and Barenboim in Beethoven or Mahler reveals many divergences in their performances of the same scores; and to hear their individual reading is the main reason for a musician to go to another’s concert. I’m not aware that the research has been done, but I assume for now that if one were to compare the impressions of those with and without musical training (or great familiarity), those without would be less aware of differences from one performance to another. (The situation is complicated, from a perceptual point of view, by the difficulty of remembering a particular performance while listening to another. This was vividly illustrated by the notoriously positive reviews of the pianist Joyce Hatto, most of whose recordings turned out to be recordings by other pianists lightly edited and repackaged by her husband. In the end, the hoax was uncovered by technology (in fact simultaneously by two different technologies), not by human listening.[2] To an extent, this difficulty of comparing performances other than by switching between recordings, allows performers not to be particularly individual, so long as each performance is persuasive in itself.)

How large these differences are depends very much, then, on one’s perspective. It may be helpful to model this. The following diagram offers a representation of the space within which performances of a WCM score can be acceptably normative. Each letter can represent a different performance of the same canonical score. Imagining the list in chronological order I’ve arranged the letters to suggest that performances have become more similar over time, but that’s not necessary for the model: they could have any positions within the space. Much more important is the shape of the space and the position of the observer. X marks the normative observer, who could be anyone trained or simply experienced in hearing performances of WCM. To them, these performances all seem very different. Y marks my position for the sake of the argument set out in this book, though it could also be the position of anyone who has not learned to expect, or who has managed to stand outside, a particular kind of normativity. To me, when I listen from this perspective, they all sound very alike. X or Y could, of course, observe from anywhere their preconceptions allowed them to be. 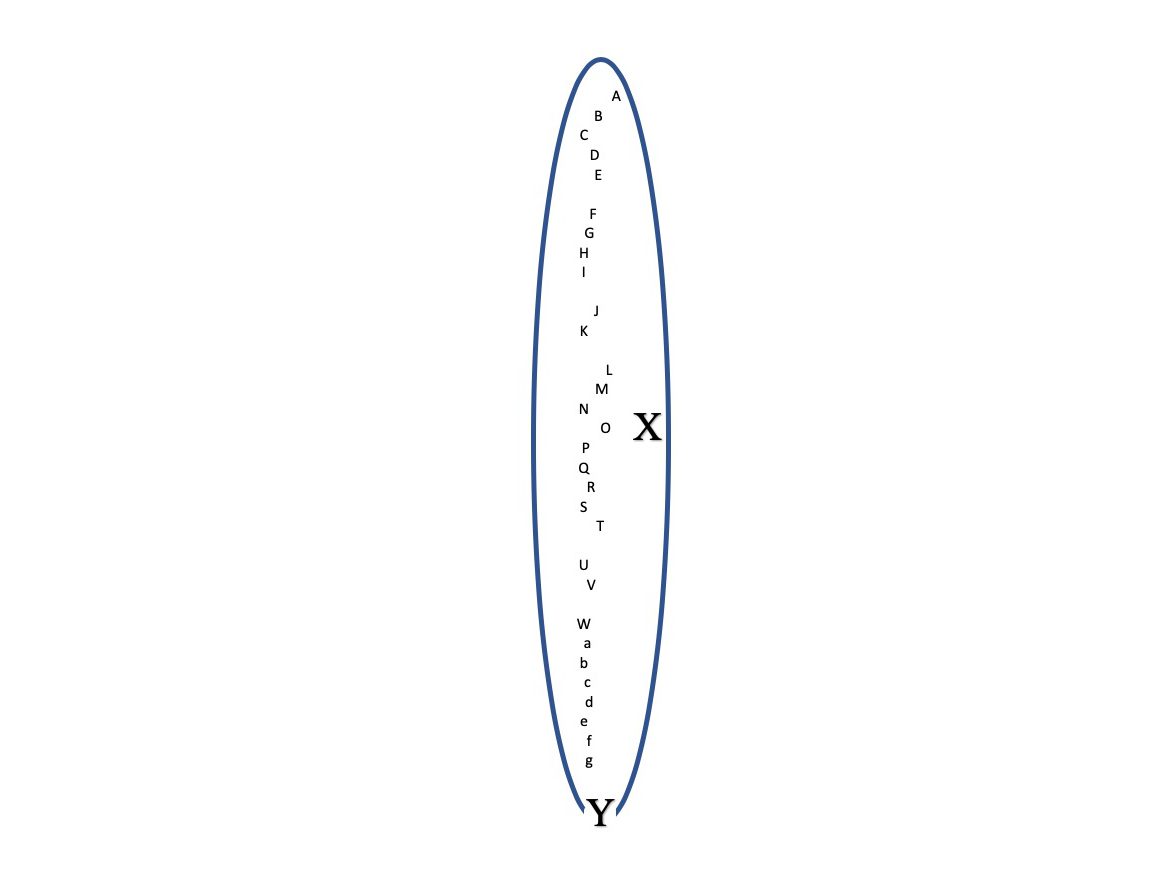 In the next diagram we see these same performances and observer positions within the much larger space, that I am suggesting exists, within which musically persuasive performances are possible. 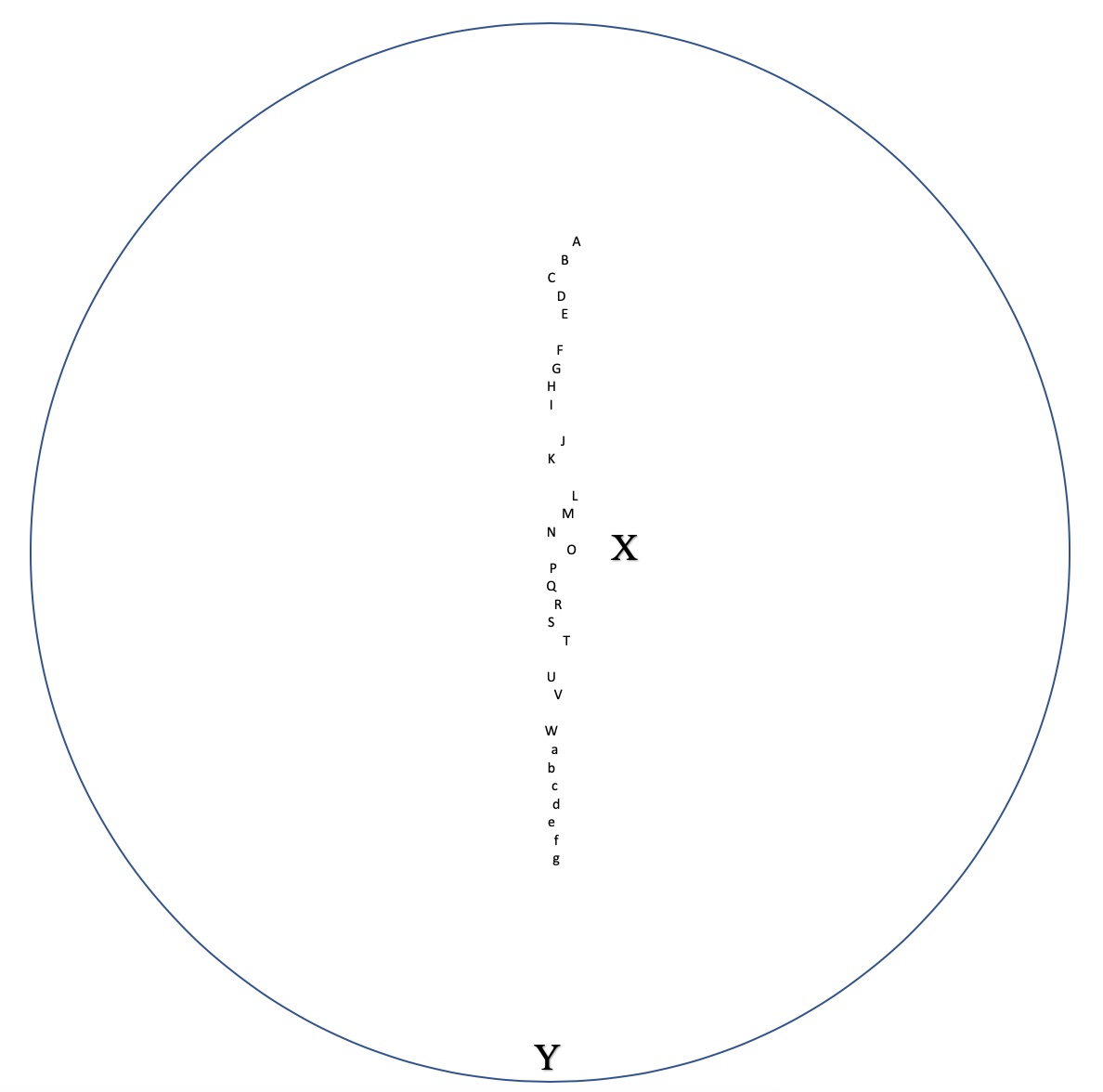 Or better still, without boundaries, since we have no idea where they may be. After all, what makes a boundary? Only a point beyond which any performance would be psychologically (probably neurologically) nonsensical whatever one’s cultural tastes and beliefs. 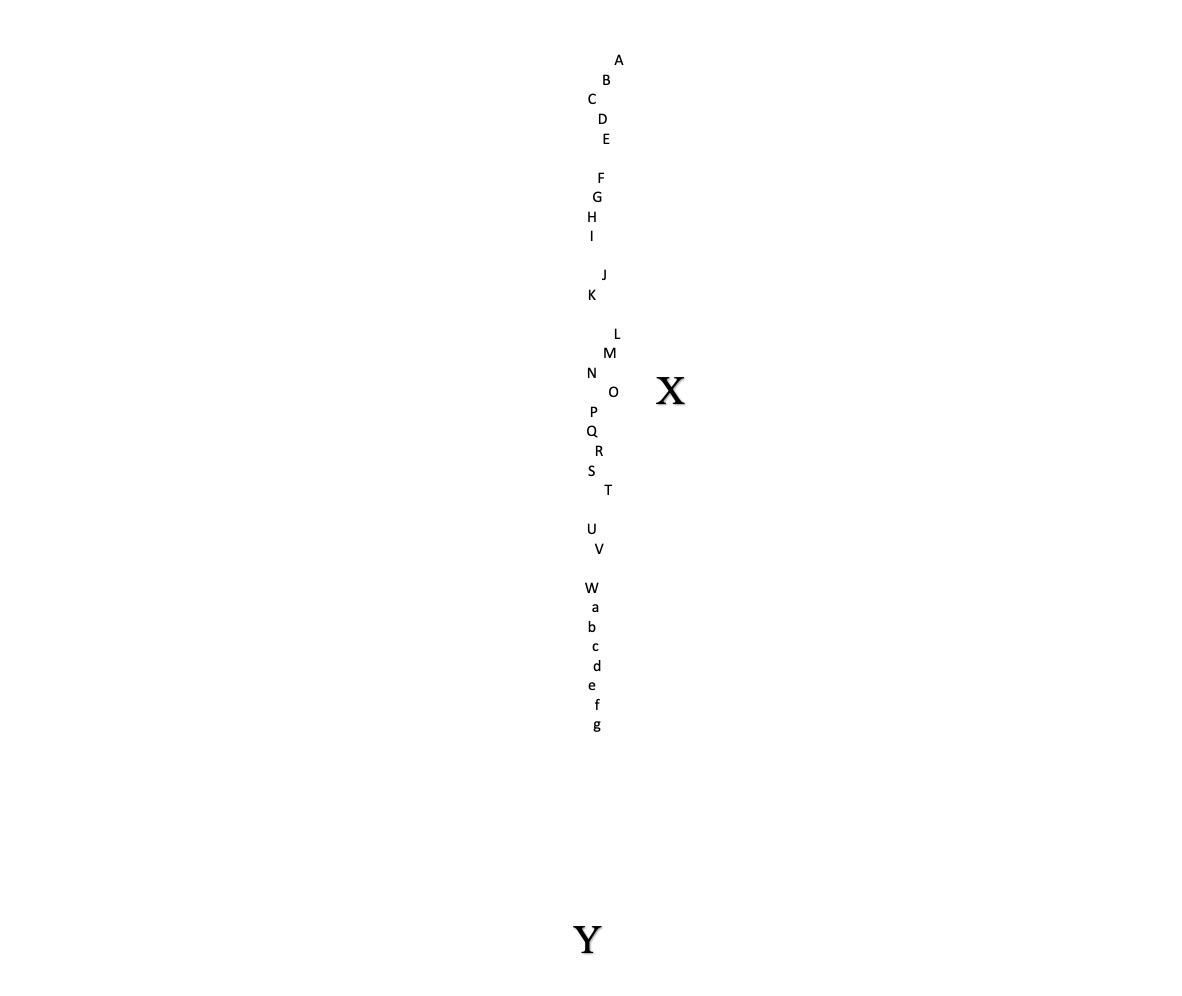 My case is that the differences celebrated by the profession are tiny compared to what’s possible and plausible (for a first attempt at discussing what’s plausible see Chapter 22). Differences that are currently acceptable (as we shall see in Chapter 9) are tiny compared even to the differences between Sir George Henschel (1850-1934) and Ian Bostridge (b. 1964), between Hilary Hahn (b. 1979) and Joseph Joachim (1831-1907), Sir Simon Rattle (b. 1955) and Willem Mengelberg (1871-1951), or Ignacy Paderewski (1860-1941) and Angela Hewitt (b. 1958): and that’s within just 100 years of recorded music-making. We’re trained, and train ourselves, to notice and discuss these tiny differences, and to imagine them as huge, because—however narrow—this is the only space within which WCM norms, supported by the ideology of performer obligations to the composer’s imagined wishes, allow us to imagine these scores. Working minutely within a confined space can be rewarding and bring wonderful insights. Musicians do of course produce marvels within this world, and never less than expert, highly accurate and professional performances. But that’s not a justification for preventing exploration. Over time critical thinking increasingly is reduced to connoisseurship, the refined observation of minute variation. But we can do better than that, I think.

Back to chapter 6 menu